My novels, HIDDEN, ILLEGAL and STUFFED are published by Albury Books.

My three novels are available from Albury Books at this link.

HIDDEN featured on Guardian Children's Books as a "Book to Breed Tolerance."

In January 2015, just after the dreadful attacks in Paris which disturbed children around the world, my novel HIDDEN was listed as one of the books which might help children cope with these bewildering times. You can read the article here.

Hidden has been chosen to feature on IMAGINATIONS : Ibby Ireland's new multicultural resource  for 2014 and there is a great review.

"Halahmy's powerful voice animates her story vividly. It is both serious and large in its scope as well as personal and familiar."

Jess is fifteen, Ryan is seventeen and they are falling in love. But each is keeping a terrible secret from the other.  On a weekend away rock climbing they move closer until a terrifying incident drives a new wedge between them. Can Jess save her family from Dad’s mistakes and will Ryan resolve his mess from the past? If not, then their loved is doomed to failure.

is the third book in the Hayling cycle of three novels by Miriam Halahmy.

What the reviewers are saying...

Miriam Halahmy really understands troubled teens - and their parents- and portrays them with warmth and optimism.

Stuffed gives you a perspective on modern issues while also giving the reader a rush of emotions.

Magic wands do not exist in Halahmy's writing and her characters have to make tough choices, so we suffer alongside her protagonists as they anticipate their imperfect but realisitic future. Can we hope for more from Halahmy? I hope so.

A truly wonderful story... really enjoyed the climbing trip...the atmosphere was very tense...this will be a great catch to teens like me.

Enjoyable, realistic, entertaining read...the author does not wave a wand and magic the problems away...you are left wondering what the future will hold...

This is good stuff...I was totally caught up and I didn't cringe once, the way you sometimes do over books about teen romance and teen problems.

Miriam binds contemporary issues into gripping narratives of friendship and self-discovery like no-one else.

Couldn't put Stuffed down and was sorry when it ended. Such a satisfying ending and such an interesting story. I did love it!

Hidden by Miriam Halahmy tackles the very serious issues of immigration, racism, judging people and humanitarian feelings. The novel highlights the Iraqi problems with the post- regime and what happened after the invasion when they changed the brutal regime to a sectarian one. All through the eyes of a teenager!
Although this is a Young Adult novel I would agree with other critics that is has been  written for all generations.  An accessible, enjoyable and informative read covering important issues, Hidden should be translated into Arabic.
Ibtesam Al_Tahir : The New Morning (Al-Sabah Al-Jadid)
Issue no.2576, Iraq.

Wonderful reviews for Hidden and Illegal in the latest edition of IBBYlink produced for the 19th Annual Conference.

HIDDEN  : Plenty here to engage teenage readers and to make them (and adults) think hard about the way we treat each other, whoever and whatever we are.

ILLEGAL : Halahmy writes an exciting adventure story but there's always more than that.

Miriam visited Wandsworth this July for our joint  Carnegie medal
shadowing event organised by Burntwood School.  Miriam gave a fantastic talk to the pupils - they absolutely loved
her and  she is featured in our display.
Penny Briers, School Librarian

The death of baby Jemma has sent fifteen-year-old Lindy's family into a downward spiral : her brothers are in prison and her parents have given up. The other girls at school all have proper families, with good jobs and nice cars. Why did Lindy get landed with such a useless one?

Lindy thinks she's been thrown a lifeline when her cousin Colin gives her a job, but she's soon out of her depth - he's a drug dealer and forces her to sell cocaine. Terrified that she will go to prison and seeing no way out, Lindy starts self-harming. Then she finds a surprising ally in fellow misfit, Karl, who is mute. Together they embark upon a desperate plan to ensure her freedom.

Illegal is the story of a teenage girl, driven to take desperate measures when all other choices are taken away from her.

Order ILLEGAL on    Amazon  or    The Book Depository

What the Reviewers think about ILLEGAL.

Excellent! Beautifully written and a really strong and gripping story.

I was swept off my feet.

Miriam Halahmy has pulled off a difficult trick - a second novel as good as her first. I read it in one gulp, unable to stop. ...looking forward to Stuffed, the third book in the cycle.

Miriam Halahmy has an exceptional ear for dialogue, her characters in Illegal are so vivid and compelling that they ensue a  breathless read from start to end, and her insight into troubled youth has us routing for characters most of us would cross the street to avoid in real life.'

Very exciting and not just one for the girls. Good plot and characters. Setting is ace.

Illegal maintains a fast pace and high drama, with a chilling undertone leaving the reader guessing what is going to happen right to the very end....Halahmy paints characters and their issues so vividly that it gives them life and meaning far beyond the page.

Well written, gritty contemporary tale. This is an author who can deal with tough, hard-hitting issues and keep things realistic.

A great story, maybe even better than Hidden and both equally exciting and equally necessary. I'm looking forward to Miriam's next book.

Illegal is another fascinating story from Miriam Halahmy and although aimed at young people, this is a book which is really enjoyable for adults too.

A fantastic read, totally compulsive, unputdownable. The ending will make you cheer.

This book is bursting with realism.

Illegal is at times a heart-wrenching read but it is a book I would highly recommend. 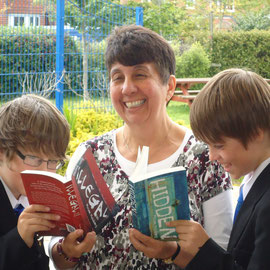 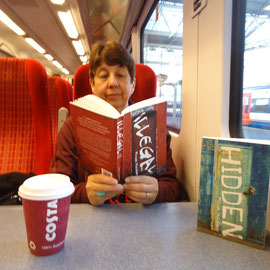 Emotional, powerful, addictive. Had me hooked from page one. Can't wait to read Hidden and Stuffed.

Miriam tackles some difficult subjects in a sympathetic and age appropriate way.

Illegal gives a real and valuable insight ino the difficulties many children face, like Lindy, from dysfunctional or chaotic backgrounds or like Karl, who on the surface seems to have it all. 9 year old Sean breaks my heart. I hope that the social worker's intervention and Lindy's support turns his life around. Lindy's parents are, quite rightly, portrayed with compassion and you have shown that with the right support, many families can work through their problems. There have been many challenges in writing this book but they never hold the story back. Well done Miriam, it is definitely a book that everyone should read.

'There's so much hidden in this little hut, and whatever I've dived into here is only going to get more complicated.'

HIDDEN is a brave debut novel tackling the complex issues of immigration and human-rights laws, through the eyes of teenage Alix.

A literary coming-of-age novel dealing with courage, prejudice, judgement, and the difficulty of sorting right from wrong. Challenging, charming, compelling.

The pace of the narrative carries the reader through the .... messages about justice and integrity.

Hidden is a terrific story. Miriam has managed that rare thing; a serious story told with a comic and emotional touch.

Hidden tackles one of the most contentious issues of our time. Everybody under your roof will find something great in this story.

Miriam tackles such a hard subject ( racism) amazingly from the perspective of teenagers. GO GET IT NOW! Can't wait to read Illegal. 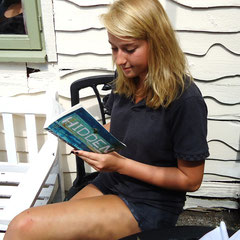 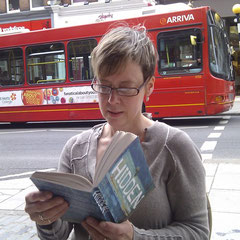 Hidden left me feeling inspired and empowered to stand up for the things I believe in...Everyone should read this book...It's invigorating!

Beautifully written.... a novel about hope.

At a time when British youngsters are increasingly concerned about immigration, it seems very timely to publish a teen adventure about asylum seekers.

People grow and learn through this book. It raises all kinds of interesting questions but never loses sight of the fact that what we want to read first and foremost is an interesting story about people we can get to like.

Point this one out to your teachers - they'll thank you for it.

A brave choice of subject matter.

The Hayling Island setting is well-evoked and the denouement is inspiring.

A great story about a very real and current problem.

Miriam Halahmy has addressed an increasingly common situation about which most teenagers know little and has cast an uncomfortable spotlight.

Alix is a marvellous heroine - an apparently ordinarygirl who turns out to have enormous reserves of courage and strength. A novel which will stretch the minds of readers of any age.

Brilliant! Un-put-downable! I liked the fact it was an Iraqi refugee as we rarely 'see' them. They are not as visible as other groups. Next installment please."